History of Our Holocaust Torah

The Reformed Temple of Putnam Valley received a Torah Scroll in January 1970. The scroll, and over 1500 other Torah scrolls, traveled on a long journey from various towns in the region now known as the Czech Republic, to Prague to London and then to new homes, ours to Putnam Valley, New York.

This and 1500 other scrolls were almost destroyed but now have been redeemed. The scrolls represent over a thousand years of Jewish history, of Jewish prayers, and of Jewish learning in Bohemia.

Our Torah scroll was written in 1830 in the town of Kolin, a town 25 miles southeast of Prague in the region that prior to WWI was known as Bohemia.

Jews lived in Bohemia for over a thousand years. The oldest tombstone in the Jewish cemetery in Prague is from the year 941. Jews in Bohemia thrived intellectually, economically, and culturally despite facing waves of persecution and restrictions throughout the centuries.

As early as the 14th century the charges of ritual murder which sprang up in so many German towns found victims in Prague. Seventy-five Jews were burned at the stake. All of the synagogues were robbed to finance the royalty and 53 Jews were burned to death. Hundreds of Jews were massacred when they were blamed for the plagues known as the Black Death. The grave-stones in the Jewish cemetery were broken, synagogues were set on fire, and their walls were streaked with the blood of Jewish martyrs. Jewish persecution and restriction continued for 500 years.

Until 1848, when full civic equality was given to the Jews, they were forbidden to own real estate other than one’s home, forbidden to engage in trades or businesses that Christians engaged in. Jews were not permitted to buy houses or land belonging to Christians, could not study at the university and had to wear a yellow ring to designate them as Jews. Jews in Kolin were only allowed to live on Jew Street.

The original wooden synagogue in Kolin was rebuilt out of stone in 1696, enlarged many times, and eventually electricity was added. In Kolin, the Jewish community had a primary school near the synagogue in which Hebrew also was taught. In 1789 fifty children attended the school. in the early 1900s the Talmud Torah Society of the Jewish congregation also supported a school for the study of Hebrew and the Bible.

Jews in the region of Bohemia mostly spoke German and supported German institutions. In 1898 the Zionist movement came to the area. Most Jews were more supportive of the Reform movement than of Orthodox institutions. There was a large and thriving community of Jews, both religious and secular. They included countless numbers of doctors, academics, scientists, mathematicians, philosophers, architects, sculptors, painters, photographers, film directors, actors, playwrights, athletes, musicians, composers, politicians, religious leaders, writers, chess-masters, and businessmen. The great writer Franz Kafka and the great composer Gustav Mahler are two examples of the hundreds of artists who grew out of this incredible cultural milieu.

In 1918, when the Czech Republic came into being, Jews were recognized as a legitimate national minority and had full rights and freedom. Jews were now able to move not only out of their ghetto to other parts of Kolin, but to Prague and Vienna as well, and as a result the Jewish population steadily diminished. By 1930 the Jewish population of Kolin, which had been in the thousands, was now 482.

This twenty year period of freedom came to an abrupt end when the Munich Agreement was signed in 1938. British Prime Minister Neville Chamberlain negotiated with Hitler, and Britain and France agreed to Hitler’s demand to annex the German speaking boarder regions of Czechoslovakia in return for Hitler’s promise of peace. The Germans marched in and the Jews from dozens of prosperous communities had between 3 and 10 days to flee.

The Nazi regime deported most of the Jews of Bohemia in 1941 and 1942 to Terezin / Theresienstadt and then many were sent to Auschwitz. The Nazis confiscated their possessions, burned or destroyed many synagogues. The Torah scrolls and ritual objects of worth were confiscated and brought to Prague. A small group of Jews in occupied Prague submitted a plan to the Nazis to save the Jewish ritual objects by bringing them to the Jewish museum in Prague so that they could be catalogued and preserved. Why their Nazi overseers accepted the plan is not known. The Torah scrolls, other ritual objects of gold and silver, and ritual textiles, along with historic archives and thousands of books, were gathered together in Prague. A task force of Jewish curators, art collectors, librarians and other experts who were effectively prisoners of the Nazis began their work under Dr. Josef Polak, a former museum director. They meticulously sorted, catalogued, and identified the items. As the task progressed under oppressive and intimidating conditions of fear and uncertainty, some of the Jews who were undertaking this work would suddenly be deported to the Terezin concentration camp and eventual murder. From this group there were very few survivors.

After the defeat of Germany, a free and independent Czechoslovakia emerged, but it was a country largely without Jews. Prague, which had had a Jewish population of 54,000 in 1940, was reduced to under 8,000 by 1947. Over 50 congregations were re-established by survivors, but in February 1948, after less than 3 years of post-war freedom, the Communists staged a coup and took over the government of Czechoslovakia. The country was back under dictatorship. The revival of Jewish life was stifled. The Prague Jewish Museum came under government control and the Torah scrolls and ritual objects were sent to a synagogue in the suburbs of Prague for storage.

In the early 1960s Eric Estorick, an American art dealer living in London, paid many visits to Prague on business, and represented many Prague artists. In 1963 he expressed some interest in a catalogue of Hebraica and was asked by officials of the state corporation responsible for trade in works of art if he would be interested in buying some Torah scrolls.

He was faced with wooden racks holding over 1500 scrolls, in seriously damp conditions. He was asked if he wanted to make an offer. He replied that he knew certain parties in London who might be interested. He contacted Rabbi Harold Reinhart, of the Westminster Synagogue, and a congregant there offered to put up the money to buy the scrolls. Two trucks laden with 1,564 scrolls arrived at the Westminster Synagogue in 1964. After months of sorting, examining, and cataloguing each scroll, the task of distributing them began, with the aim of getting the scrolls back into the life of Jewish congregations across the world. The Memorial Scrolls Trust was established to carry out this task.

Our Torah scroll, #14 from the town of Kolin, is our continual reminder of the millions of lives that were destroyed in the Shoah. It has the Torah identifier of MST#14 and is on permanent loan from the Memorial Scrolls Trust.

When we take this scroll out of the ark and read from it we can pause and imagine this Torah in another place, in another time—in a world that has been completely lost, destroyed by a force of great hate and intolerance.

We are left to remember this evil power that destroyed 6 million Jewish lives, and millions of non-Jewish lives. Let us use our power and resources to say never again to hate and intolerance in any form, and in this way we honor their names and their memory and continue the sacred work of passing on our rich heritage of learning and ethical living to the next generation.

In 2003, our Memorial Trust Torah was restored by scribe Neil Yerman and once completed we followed up by restoring our other Torah.

Meet our other Torah: 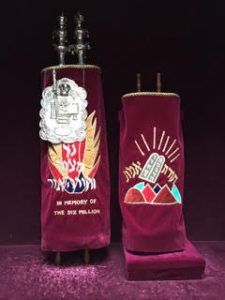 I was likely written in the 1930’s old and my writing is in the style, or K’tav, of Beit Yosef and is probably Polish in origin. The height of my parchment sheets is 25 ¾ inches, my columns are 19 ½ inches, and the number of lines per each of my columns equals 48. My parchment is calfskin. The back of each of my sheets is coated with gesso and the fronts are natural. My Atzei Chaim, or wooden rollers, are 28 inches high and are of German origin.

The scribe, Neil Yerman, describes me as masterful. My K’tav was written with “Kavannah Plus” (spiritual intention plus) and my letters are uniform and easy to read.

Finally, Neil says that I am “Gezunteh” or heavy. Anyone who has lifted me will agree with this.

It has been my pleasure to share my words with you all these years. Thank you for restoring me to my original beauty. We will continue to study and learn together.