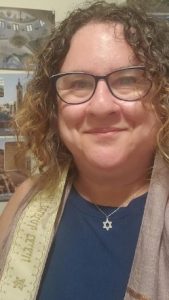 Chazzanit Annice Benamy is an active participant in the Reform Movement. Her love of
education, music, and Reform Judaism stems from her family’s involvement at her
synagogue, Anshe Chesed-Fairmount Temple, in Cleveland, Ohio. When she was 14,
her parents sent her to URJ Kutz Camp (Jewish Teen Leadership Camp) in Warwick,
New York, where she experienced different ways to be a reform Jew. Her journey as a
Jewish educator began at age 16 as a synagogue song leader and then continued as
music teacher, family educator, junior congregation coordinator, classroom teacher, and
director of religious school.

From 1986 – 2018, she served as cantor at Montefiore Nursing Home Ohio, including
traveling back to Ohio to lead High Holiday services, when she moved to New Jersey in
2007. In 2016, she received her certificate in Jewish Sacred Music from Hebrew
College, in Newton, MA. In 2020, she received her Post-Baccalaureate Teaching
Certificate in Holocaust Studies and Prejudice Reduction. This summer, Chazzanit
Benamy was named a Teaching Ambassador for The Defiant Requiem Foundation.
She will use their education materials and present them in educator workshops or
regional conferences on the Foundation’s behalf.